Originating from a Spanish poem entitled, “Oda a las cosas,” by the award winning Chilean poet Pablo Neruda, the exhibition’s title reveals a powerful affirmation by the artist, professing a love for all things: old, abandoned, discarded, and forgotten. AMO las cosas locas, locamente., is a visual statement as much as it is an ethical sentiment forged from nuts & bolts, screws, steel cages, fabric, paper and thread.

Choosing rugged, unyielding materials, Vázquez creates forms that reference the history of Uruguayan Constructivism. Relying on basic geometric elements such as lines, squares and planes to produce her minimalistic and evenhanded compositions. Such is the case in “Untitled” 2022, a drawing made of thread floats effortlessly within and outside a blunt steel frame resulting in a harmonious juxtaposition of configurations.

In “From Where You Look,” Vazquez’s work begins (like most others) with a discovery, in this case several rust steel cages. The irrationality of the chosen material and chance merge, crudely exposing the passage of time and giving the outdated a new chance of victory, making visible the inherent contradictions and perfect impossibilities. Straight lines, although they exist, do not seek perfection but rather challenge it and make it absurd. The materials fuse and highlight the shadows, and it is in this that the apparently separated or distanced forms come into contact and change their dimensionality and relationships. “Me gustan las tenazas, las tijeras, adoro las tazas, las argollas, las soperas…” / “I like tongs, scissors, I adore cups, rings, bowls…” (Neruda, lines 1-10). Proposing a second life for discarded objects and materials that often end up on the trash heap of history, Vázquez’s work is grounded in the belief that the world is overflowing with treasure(s). 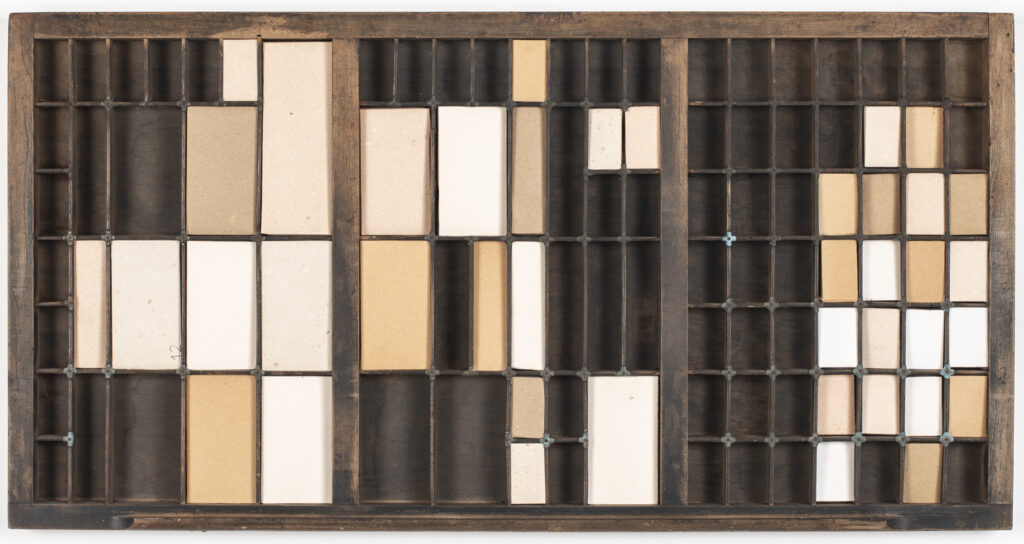 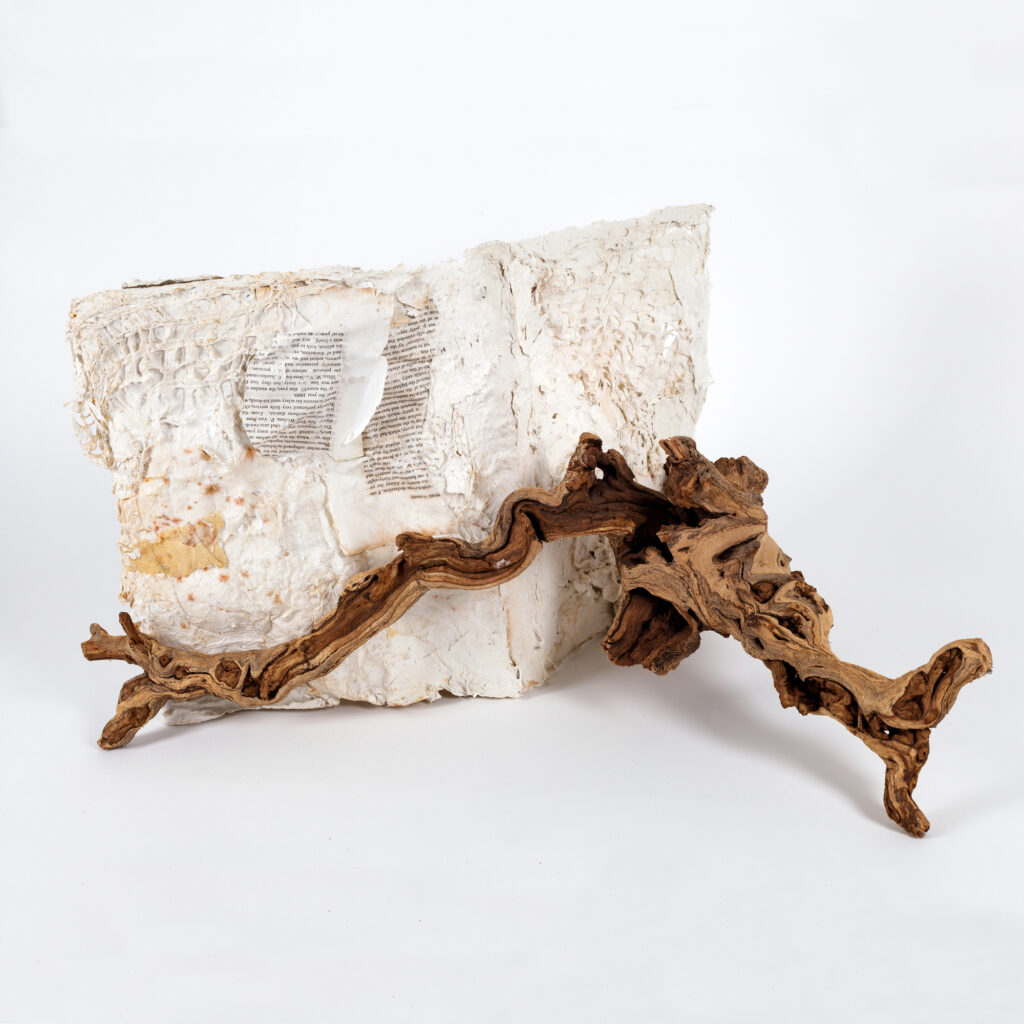 ÁMATE is an immersive art installation inspired by ancestral Mexican Amate paper-making techniques and traditions. A play on words, Ámate refers to the imperative verb that means love yourself in Spanish, and Amate, which comes from the Nahuatl amatl, a bark paper produced in Mexico since pre-Hispanic times. Amate paper was used for healing rituals, and the tradition has been preserved by generations of shamans to this day. Karla Kantorovich creates a contemporary version of handmade paper works using locally sourced recycled materials. The piece is a reflection on healing through self-love.

The artist believes the first step to healing is loving ourselves through acceptance and compassion. However, self-love also springs from the connections we forge with nature and the people surrounding us. In this installation, a tall, handmade paper tree represents that human need for connection. It sprouts from a corner of the exhibition space, the roots providing grounding, its branches and leaves extending to provide protection. This enormous tree canopy offers an inviting and peaceful space for reflecting inwards. After all, finding some time and space for self-reflection is one of the fundamental expressions of self-love.

Papermaking appeals to Kantorovich for its relationship to the natural environment and meditation-inducing effects. Also, working with recycled material signifies the possibility of transformation; giving materials a second life makes Kantorovich feel like change is possible. With this premise of transformation in mind, she explores the intrinsic qualities of paper: it is fragile but malleable. It can burn in an instant, yet it can also last for centuries. Paper can be easily destroyed but also reconstructed. It can be recycled, transformed, and preserved. To support this noble material, Kantorovich uses fabric to strengthen and create movement in her tree canopy. She also incorporates dry leaves and branches to signify her spiritual bond with the natural world and uses thread to unite all the pieces.

In a world filled with anxiety, isolation, and uncertainty, ÁMATE aims to be a serene space for contemplation and introspection. Visitors are invited to meditate on how to have a deeper relationship with themselves and nature and to reflect on their possibilities for healing, transformation, and growth. Text by Rina Gitlin 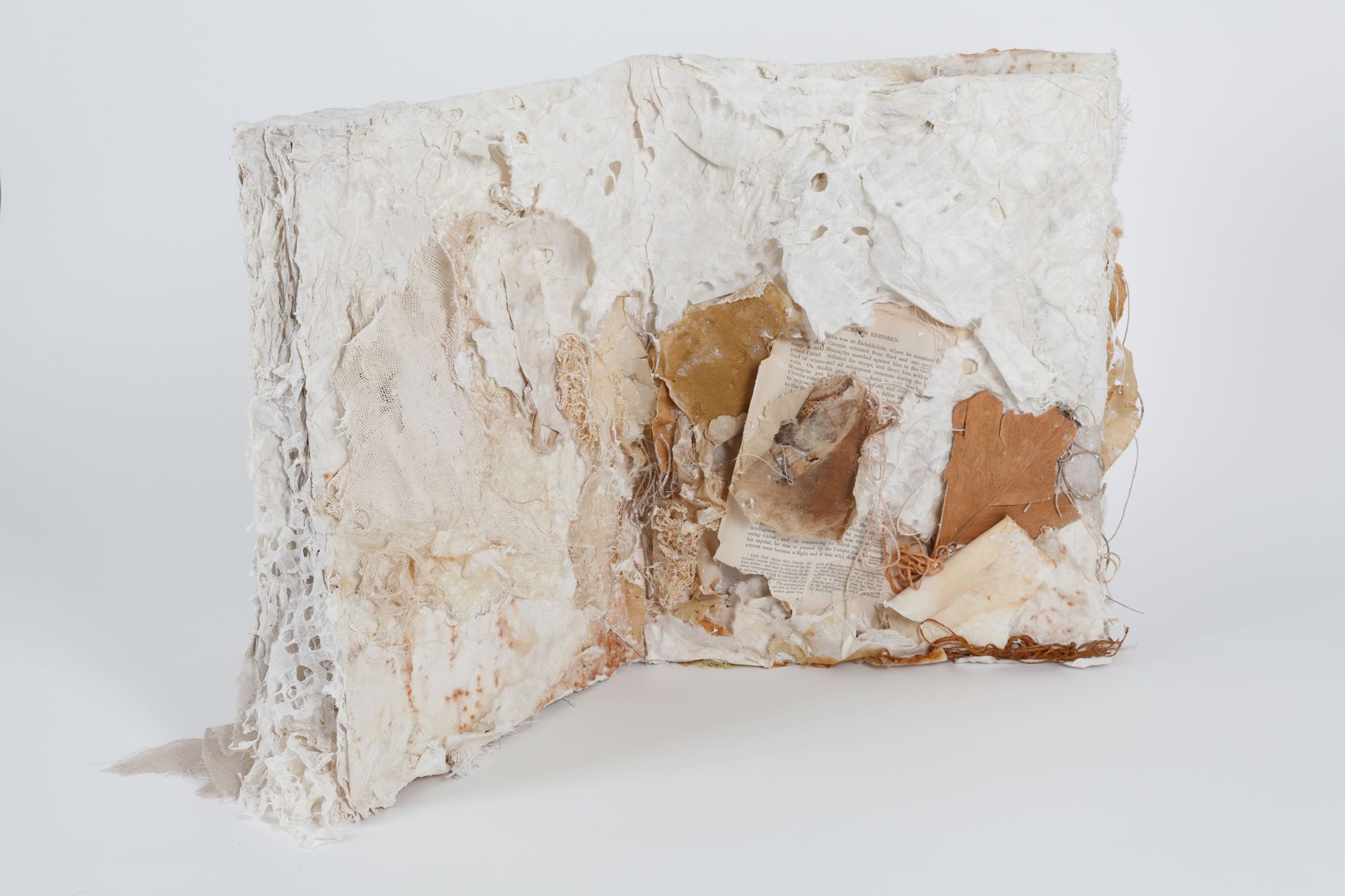 Piero Atchugarry gallery presents a contemporary art program and modern art survey. The gallery opened to the public in September 2013 with a Post-War Italian art exhibition. By January 2014 the gallery moved to a large stable adapted as an exhibition space in Garzón. In this space the program allowed outdoor and indoor proposal exploration, through the creation of dialogue between architectural features and curatorial practices.

On December 2018, the program expanded to North America with a second location, a 9000 square feet warehouse on 5520 NE 4th Avenue in the Design District neighborhood. The participation of the gallery in what is a boiling art community that connects Europe, Latin America and both coasts of the United States represents the commitment of the program to support and present the work of local and international artists with an institutional approach.