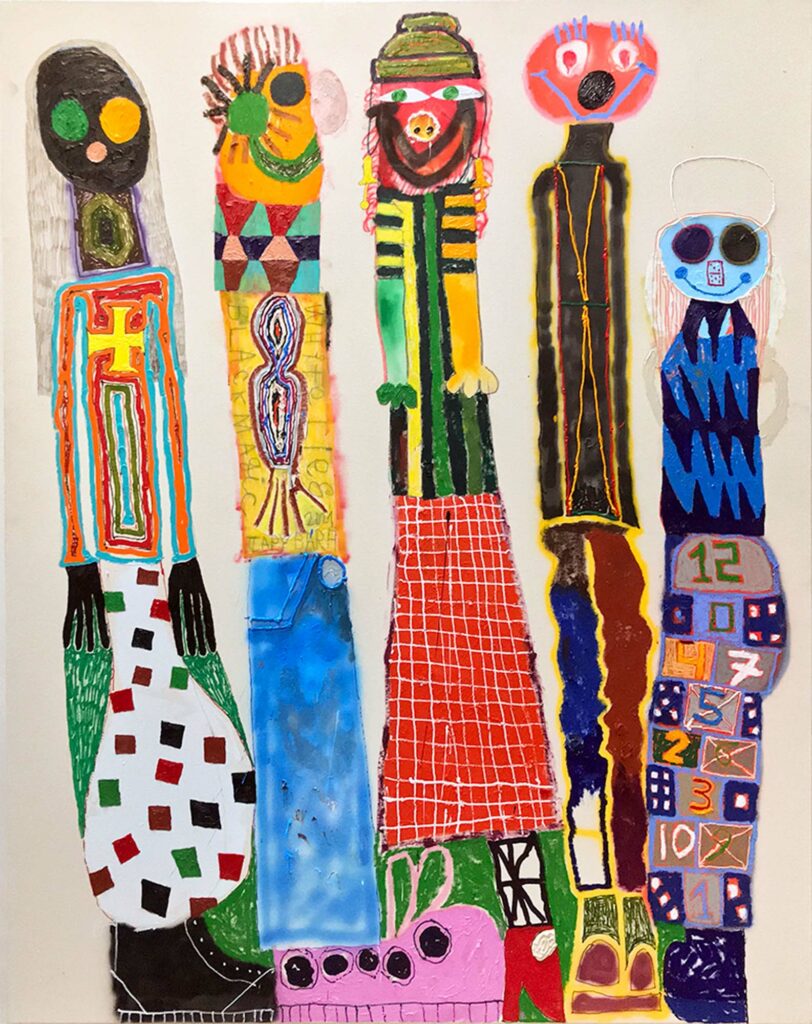 It seems like a shrill children’s birthday party among folkloric alien friends. But, maybe they are just masks and underneath are ordinary outsiders, losers and hopefuls. A man walks his turtles, a woman her tapir. Others have big butts or carry bumps like from a hernia in front of them. Another grows a hand on his shoulders instead of a head. There are hulking bodybuilders and zombie soccer players. Gnomes, dwarves, or bodies as long as totem poles. This is how Michael Swaney builds most of his bodies. The totem pole, a monumental sculpture of Native American culture primarily in North America, consists of tree trunks with carvings and paintings. In a piled composition, the individual animals and symbols tell stories of the deceased and their families. Swaney’s figures exhibit a similar composition. Their individual pieces of clothing and body parts pile up like building blocks. The language of form seems childlike and naïve, bodies are built like stilts, perhaps a push causes them to collapse like a domino game. Then they would have to be built up again from scratch, like puppets of a cheerful occultism.

Michael Swaney is a self-taught painter. Nevertheless, he is not considered an outsider, as in modern times the excluded, the crazy, the children and members of foreign, “exotic” cultures were called. Swaney’s inspiration, however, lies here, in art brut. Often the characters bear names of these outsider artists. “his picasso” was aloïse corbaz, swaney tells us.

Nevertheless, he says, he is a child of mass media, of pop and emoji culture, in which communication is about big heads. Most strongly, however, one sees the sign language of children in his works. But he does not copy the products of other children, but thinks back to his own attempts at drawing as a 10-year-old boy. He was also influenced by a music video for little players, “finger family collection – 7 finger family songs,” which he played with his daughter. In it, heads were attached to the fingertips, and one hand then depicted a whole family with mother, father and children. The figures are found on the canvas in a tidy manner, like in a cutlery drawer. Or better, like in a shoe box, sometimes the thicker end – the head – is on top, sometimes on the bottom. A wink at Georg Baselitz? Swaney explains with a smile that in this way, simply more figures fit on a canvas.

No one is left to fall by the wayside. Swaney takes care of everyone. Even the pets. Of course, you can see the difference: these are not true children’s pictures. The adult, artistic intervention, the deliberate use of apparent naivety, the control of errors and the intentional non-perfection characterize swaney’s pictorial language.

Painted-out surfaces are scribbled and flawed. Sprayed surfaces are crude. Contour lines run good-humoredly through the body and exaggerate their forms. Colors are exclusively signal and desirable. Skin does not exist in natural form. Paintings, rouge, and carnival provide freedom. Swaney’s visual language is uncompromising. It does not hesitate, it recognizes what it is, reflects and consistently moves on. This is what distinguishes it most from children’s drawings.

At the end, the view lowers. They say that shoes reveal the most about someone. The turtles and tapirs turn out to be slippers, their owners putting their feet in them. Are they all aliens in the end? 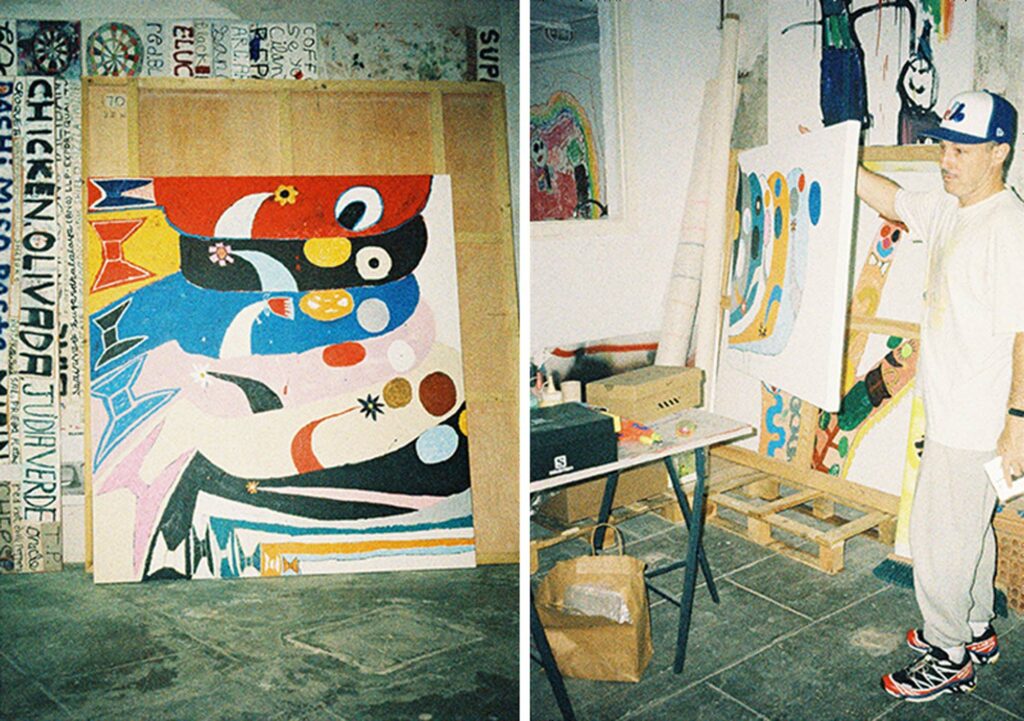 BREACH IS the newly founded contemporary gallery from Fabien Castanier and Ed Broner. With Castanier as the gallery’s owner-director and Broner undertaking curation and art direction, BREACH is built on a philosophy of openness and equal opportunity. In contrast to selection processes based on discriminatory categories, such as social background or educational credentials, at BREACH, it is the quality of the artistic work that is paramount in the program’s determination.

As a decades-long gallery owner and director, Fabien Castanier continues to explore ventures in the art world sphere that bridge the gap between cultures and genres. Founding BREACH has opened up more pathways towards the cultivation of emerging and diverse talent, always with the mission to unlock new potential within a strong international gallery program. With his sights aimed at creating a welcoming space for contemporary and cutting-edge artists, Castanier remains an advocate for the perseverance of the cultural landscape in Miami and beyond.

As an artist and curator, Ed Broner has long been intensly involved with the most diverse places in which painting can be created. On the one hand, he has demonstrated a keen intuition for young talent for many years – even when they were still students experimenting at their universities. He has a sense for trends, movements and emerging careers. His former blog Now Now Contemporary brought about influential discoveries. On the other hand, Ed Broner doesn’t just look around at institutions, nor is he interested in who was a master student of which professor when making his selection. He makes no distinction between self-taught artists, outsiders of an underground culture, graffiti sprayers, or award-winning fellows. Age and origin are also irrelevant. Ed Broner curates paintings, not biographies or profiles. An unfortunately rare but all the more exciting approach. 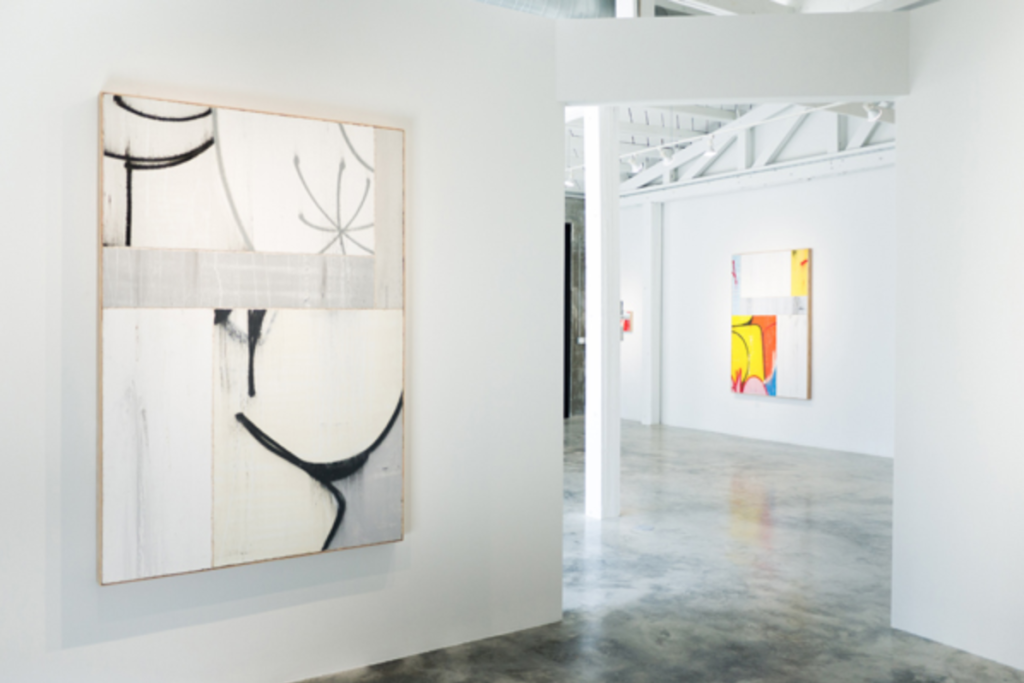